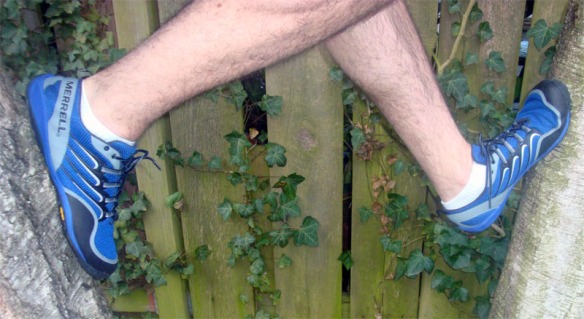 grippy enough to hold me airborne

This past weekend, my wife and I finally tracked down the elusive Merrell “Glove” line at a small store called “Born To Run” in downtown Bellevue. They had the entire mens line, and only the ‘PowerGlove’ was missing from the women’s line… but I don’t know how much of a loss it really was. It was my least favorite of the line on paper.

However, we saw the rest of the lineup, and proceeded to try on most of the rest of the lineup. I tried on the Trail Glove and the True Glove. My wife tried on the Pace Glove and the Pure Glove. We ended up with three different pairs: the Trail Glove, the Pace Glove and the Pure Glove (I’m sure some marketing guy somewhere is cackling in delight because all the Gloves marketed to men begin with a “T” while all the women’s marketed shoes begin with the letter “P”). Sarah loved both the Pace and the Pure initially, because they felt comfortable, natural and fit her feet near perfectly. I walked away with the Trail Glove, because I felt like the toe box felt larger than the True Glove. I did not try on the Tough Glove, but probably will at some point in the near future.

Long story short, I love these shoes. They fit well, are crazy comfortable, and don’t make me feel like everyone is staring at my toed shoes (while they might be a good conversation starter, I don’t know how much the ladies dig ’em. Some are all for it, while the majority just think you’re strange and a little gross. You know, make you feel like you’re in 5th grade again. Fantastic times, really). I can tell there is a tiny bit of padding there, but not so much that it gets in the way of me feeling the ground (comparing them to my ASICS is like comparing a 1970’s suburban to a Koenigsegg sports car – there really is no viable comparison). They in no way hindered my ability to run on the middle of my foot (which is how you’re supposed to run – see example video below), nor did they feel too heavy or too big or anything like that. Overall, it was a great first experience. I ran two 800 meter runs over uneven blacktop surfaces – some uphill, some downhill. My feet and knees feel better now than if I had run in a pair of marshmallows (which I had done just last Friday, so the experience was fresh in my memory).

I picked them up Saturday and just wore them around everywhere I went. They’re great because they hold the middle of my foot and my heel snugly while letting my toes have the room they need to do their thing.

So, long story short, I’ve only had them for two whole days now, have gotten a ton of complements on them, spread the word a little bit, and my feet have never felt so good. If you’re contemplating whether or not to grab a pair of these, don’t hesitate – do it. You’ll thank me later.

The following video explains how to prepare your body for the rigors of running on your anatomy, as opposed to running on a cushion of marshmallow.